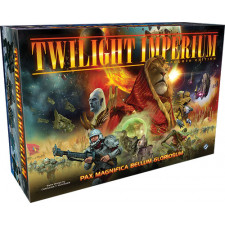 DT: Charlie, Iâ€™m going to tell you a story about my most recent play of the fourth edition of Twilight Imperium. Cool?

CT: Not really, but Iâ€™m guessing that doesnâ€™t matterâ€¦

DT: Nope! I was playing as a bunch of religious fanatics. Indoctrination, suicide bomber ships, the works. But a bevy of bureaucratic tools had taken control of the galactic capital, Mecatol Rex, and I had a secret mission to see them removed.

The job soon became a debacle, then a quagmire. Removing their fleet in orbit was no hard task. In fact, all it took was a single ship rigged with enough explosives to make a supernova blush. In one brilliant flash, I killed a fleet that cost over double what Iâ€™d just invested. But then came the invasion. I was planning to indoctrinate the locals to turn them onto my side, but then a meeting of the galactic council robbed me of my influence-producing planets. Without influence, I couldnâ€™t broadcast my mind-control evangelism channels onto the surface of the planet, which meant my invasion would have to be fought via conventional means.

And we flubbed it. Totally got smashed. Planetary shields that blocked my bombardment, my infantry shredded before they touched the ground. The end result was my invincible fleet in orbit, but the bureaucrats still stinking up the planet below. If anything, I was keeping them safer than they would have been otherwise. Meanwhile, some wormhole aliens were zipping around and raiding my tender underbelly, while a team specializing in plus-sized War Suns crept deeper into my sovereign space.

I lost. Badly. But also grandly. And thatâ€™s what I dig most about Twilight Imperium. That play was both tightly focused and entirely unlike my other plays. It featured backroom deals, betrayals that made people say words they would come to regret before the night was done, and fantastic interplay between a handful of the gameâ€™s seventeen distinct races. Sure, it took six hours and we were bleary-eyed the next day, but man, it was worth it.

So. Whatâ€™s your story?

CT: My last play was both similar and substantively different.

My conduit into the ravaged universe was a cluster of slaves who had broken away from their bitter masters. Carrying the secret of the great War Suns, the larger conflict began with an echo of tension as I pointed my spherical eradicator into the exposed sides of my neighbors.

I fought my burning instincts to crush, kill, and destroy and settled on growth while wielding that enormous club as a deterrent. The lot agreeably engaged in a longstanding cold war that would last the bulk of play as I consistently threatened and cajoled those around me to do my bidding.

Miscalculation and poor judgment led to Mecatol Rex quickly falling into the hands of my foes while I was mistakenly content growing in power and accomplishment in my own little section of the galaxy. My cinder-people worked tirelessly to pump out dreadnaughts and a second world eater as I gleefully rapped my knuckles on the console of my voracious flagship. My beasts were ready and blood they needed. Unfortunately it would never come.

Betrayal lead to a formation of a galactic council and the once dejected Winnu had finally found the support and sheer nerve to rejoin with their lost brethren on Mecatol Rex. They would establish a new order and propel themselves with social and cultural clout beyond what I could enforce with military strength.

I redoubled my efforts to break the burgeoning conspiracy but the Lazax made a fateful play to seek repayment for their allies eternal loyalty and it was too little too late. With the greatest technology of the thousand suns barreling down on the Winnuâ€™s home world, the game ended with a sly nod and a soot-framed scowl. It was equal parts breathtaking and deflating as if a third party had just re-written your history, having you play second-fiddle to your own legacy.

DT: That was melancholically beautiful.

You know, the one thing Iâ€™d always heard about Twilight Imperium was that it was long. It was the one detail that always drowned out everything else. â€œSet aside a whole day for it!â€ people would say. â€œIt lasts eleven hours, so make sure your chairs are comfortable!â€

And yeah, sure, itâ€™s a long game. But itâ€™s not nearly as long as I expected. More importantly, it needs that breathing room. It needs lingering moments for reflecting on the fate of your empire, drawn-out battles that could go either way, and the occasional pause for somebody to agonize over their turn. Not necessarily because they donâ€™t know what to do, but because theyâ€™re working up the nerve to launch an unexpected betrayal or embark on a lengthy space crusade. Thatâ€™s a rare thing in games, I think, taking a long time to make a move because youâ€™re scared of committing to it. Iâ€™m not sure Iâ€™ve seen many games besides Twilight Imperium really capture the thrill of standing on the precipice and deciding whether itâ€™s safe to jump.

The question, then, is whether the investment is worth the payoff. What do you say to that?

It does help that the fourth addition streamlined things quite a bit. This has cut down on needlessly complicated decisions and re-focused the game where it counts. Regardless, that payoff is outstanding. The long form allows your empire to breathe and flourish with definition. It allows you time to ponder the betrayals and fuss over the outcomes and how they will ripple throughout later turns. It helps distance this game from competitors such as Eclipse and Forbidden Stars, as it places a stranglehold on the word â€˜epicâ€™ and doesnâ€™t let go.

DT: More than that, I feel like Twilight Imperium is one of those rare games that balances all of its many disparate elements just so, which means there isnâ€™t much of a window to complain. Thereâ€™s a lot of chances to battle, but picking the right ships to counter an opponentâ€™s fleet can go a long way toward tipping Libraâ€™s scales in your favor. Negotiation is crucial, but it isnâ€™t really about who can lie the hardest. And even though the technology system can be somewhat cluttered, with a bunch of little bonuses piling up here and there, it still offers a handful of logical upgrade paths that arenâ€™t too tricky to chart a course through.

It isnâ€™t just epic, is what Iâ€™m saying. Itâ€™s epic while also being functional. Rather than wrestling with which cockpit lever does what, piloting this particular ship is generally about pointing it in the right direction and slamming the, uh, hyperspeed pedal.

CT: Yes, much of this we owe to the transition from third to fourth edition. The bloated tech tree was killed and buried. The player sheets were updated with vital ship statistics. The upgrades themselves were cleverly altered to simply be placed over the existing artwork. Much of this was Fantasy Flight simply growing over the past decade.

DT: The biggest surprise for me as a newcomer was that it boasts this really slick system for handling your actions. Every round revolves around that draft to choose your strategy, then doles out commands for moves, fleet size, and the ability to react to other playersâ€™ strategies. Itâ€™s a lot more â€œdirectedâ€ than I first anticipated from this very sandboxy space conquest game, but I appreciate the way these systems center everyoneâ€™s approach on very tangible things like extra moves, unlocking tech, blocking attacks, and so forth. You can tell at a glance how big a fleet somebody can support and whether they have moves to intrude into one of your systems. Thereâ€™s a lot of immediate feedback there that makes it a surprisingly easy game to play.

I mean, it isnâ€™t entirely easy. But I think you get my gist. 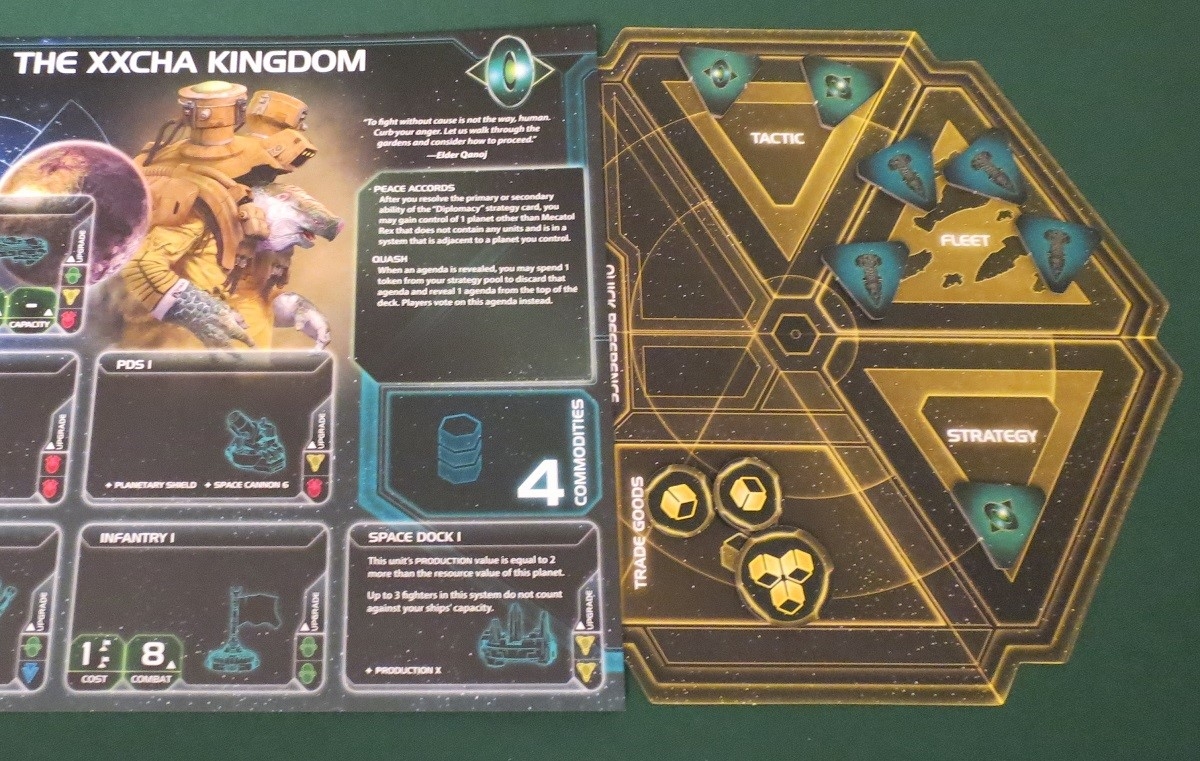 CT: For sure. That dichotomy between this overwhelming sprawl of opportunity and those aligned tactical widgets provides the perfect mix. Thereâ€™s a strong balance here as the game forces you to commit to concrete decisions with those Strategy cards that form the direction for a significant chunk of play. By breaking up the heady strategic decision space, it compartmentalizes the complexity while also forcing a torturous decision as you give up agency over another particular field. Choosing to be proficient at moving this round (Warfare) will mean youâ€™re not pushing at full thrust towards technological advancement, and so forth.

Much of the game is mitigating that action triage and allowing yourself ample room and resources to get by as best as possible with those Strategy cards you havenâ€™t selected.

DT: In terms of criticism, I do think it can occasionally feel somewhat brittle, especially when players really embrace â€” or perhaps abuse â€” the gameâ€™s more negotiated aspects. In one recent match, a friend was so far behind that he offered the leading player the diplomatic card that would hand him a game-winning point. That only failed because everyone was so loudly pissed at the prospect of playing for five and a half hours only to lose because somebody was fatigued. Other times, Iâ€™ve seen factions swap planets temporarily back and forth via negotiated invasion in order to meet objective cards. Trades like that canâ€™t help but feel gamey.

These are â€œplayer problems,â€ to be sure. But just as some cooperative games lend themselves more or less fully to abuse by alpha players, Twilight Imperium does require a complement of equally-committed folks in order to really hum.

Then again, if that and the gameâ€™s length are my only significant reservations, Iâ€™m pretty much criticizing a delicious crÃ¨me brÃ»lÃ©e for being too yellow.

CT: Commitment is certainly one of the designâ€™s requirements. However honestly, fatigue is not a terribly significant issue in my experience.

The way the game minimizes downtime and constantly keeps you engaged means the wicked tick-tock of the clock is relegated to background fuzz. Youâ€™ll sit there, two and a half Monsters and more than a Hacanâ€™s share of pepperoni pizza inside you, and the day will fade away in the blink of an eye. As the stakes gradually rise, youâ€™ll find your posterior inching off the edge of your seat, turn by turn. In that final round where multiple players are within a blink of 10 victory points, itâ€™s all ready to boil over. The way momentum chugs forward like a boulder without care is impressive and engrossing.

DT: It certainly can boil. The last time I played, at around the four-hour mark all our players went from coolheaded to salty, and every last negotiation was lined with not-so-veiled threats and more than the occasional insult. Thatâ€™s a testament to how fully this game can burrow beneath your skin. All in all, this fourth edition of Twilight Imperium has easily been one of my favorite releases of the year. It possesses the sleekness and elegance of a dreadnought fresh off the assembly line, and I canâ€™t wait to continue peeling back the layers and trying out new factions.