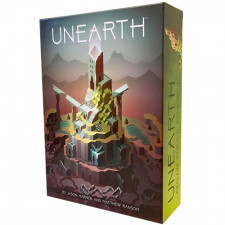 Critical Misses: Timing of rolls and set collection as a victory condition breaks the mood

Worker placement games are tricky thing. Done right, they become classics like Puerto Rico and Agricola, which you either just pronounced like the soft drink or incorrectly, and done wrong they force a zero sum into an unrealistic place. The right ones present a different challenge, however, which is why top Puerto Rico tournaments start with a bid for turn order or Indigo and games between masters are over long before the victory points are counted. To break the pattern, games like Alien Frontiers used dice as workers, introducing uncertainty through our favorite six-sided god. Unearth follows this path, challenging two to four players to dig up the remains of a lost civilization and chase that elusive Euro-victory: popularity. It works, bringing theme, interaction and a sense of history into the world, and a couple mechanics along for the ride that taint the narrative.

Each playerâ€™s dice are delvers, sent to a site for one of two purposes: uncover various ruins or use the local minerals to build wonders. The interesting part of Unearth is you choose the location before rolling, which is unique in this genre, and mood-breaking, since it requires rationalization of sending your worker to claim a site, only to find a FedEx box on your doorstep containing a red rock and an apology note. Even millennia ago in a faraway land, bosses had to deal with Millennials, I guess. 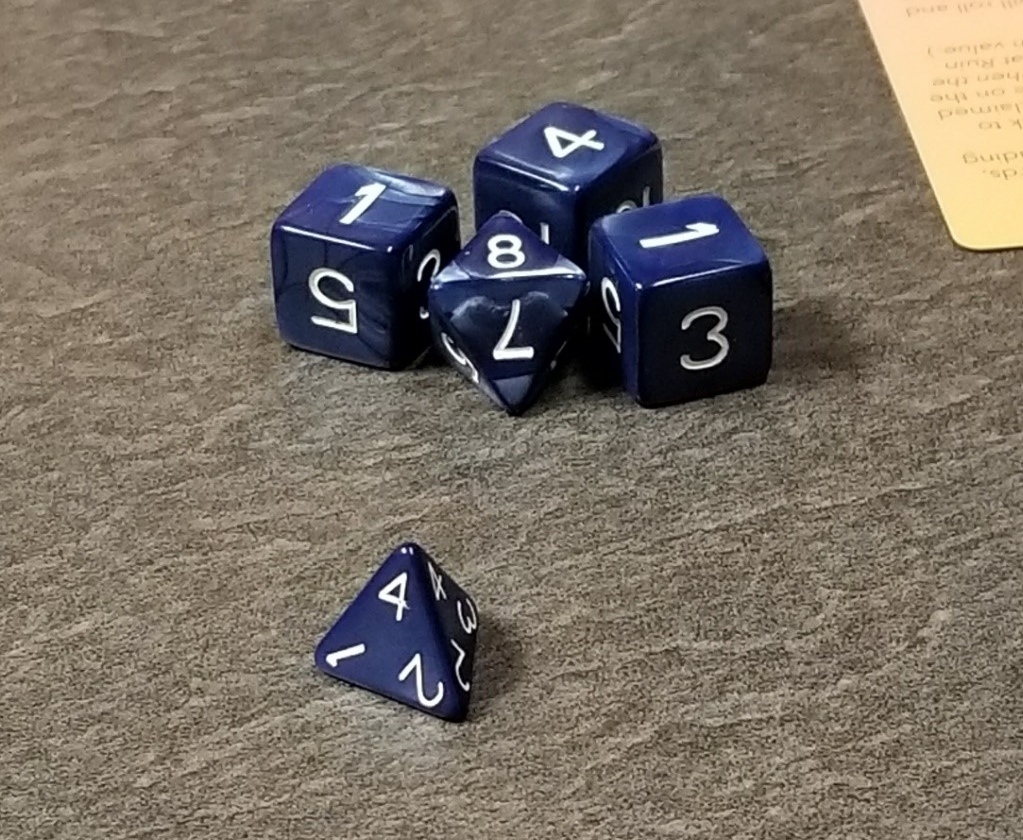 So 4, do you consider yourself management material?

These random outcomes do force players to adapt to a changing board, which is one of my favorite things, so Unearthâ€™s turn progression doesnâ€™t annoy me; it just reminds me Iâ€™m playing a game, not actually discovering a lost civilization, and keeps me from truly loving it. That idea is an underused and fascinating one in gaming, and I was ready to leap into a strange past with pick and shovel. For now, Iâ€™ll have to be content with a fast, engaging game, which Unearth does deliver, adding another long-lost relic to the Euro mix: real interaction.

Instead of being content with getting there first, Unearth allows players to change their own or opponentsâ€™ dice, or even relocate their workers via cards played before they roll. Thereâ€™s risk involved here as well, since the dice may not fully support your play, but the reward of a well-timed claim jump breathes fresh life into the worker placement genre, and keeps others from following the time-honored Euro convention of surfing YouTube until itâ€™s their turn. 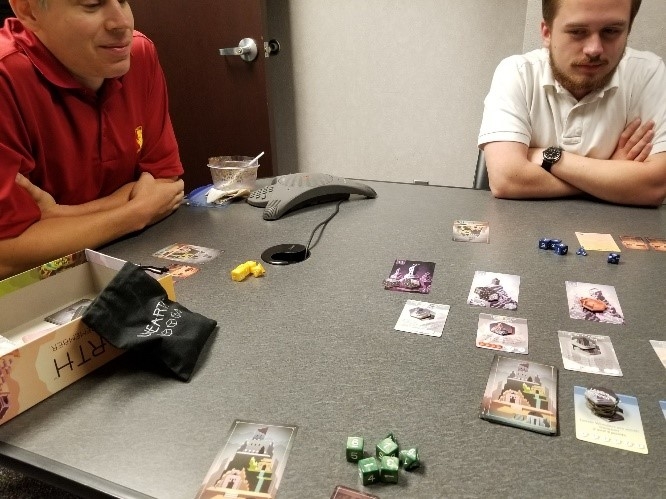 Too bad the Hovitos donâ€™t know you like I do

The rocks your workers semi-intentionally gather can build one of many wonders available to the players, laid out in a hexagonal tableau that forms a somewhat separate game space for each player and adds depth to Unearth. A lot must be watched on the tabletop to effectively counter your opponents, and multiple but manageable paths to victory allow real strategies to emerge after just a few plays, creating tension and revealing depth. 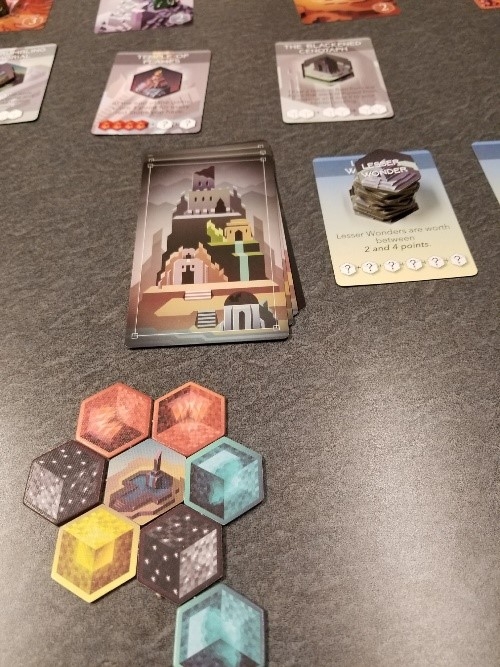 The Reflecting Pool wasnâ€™t built in a day

These wonders also grant rule-breaking powers to their creator, further tweaking the endgame as players raise a finger and interrupt each other, snagging cards, stones or other benefits while they drive toward victory. 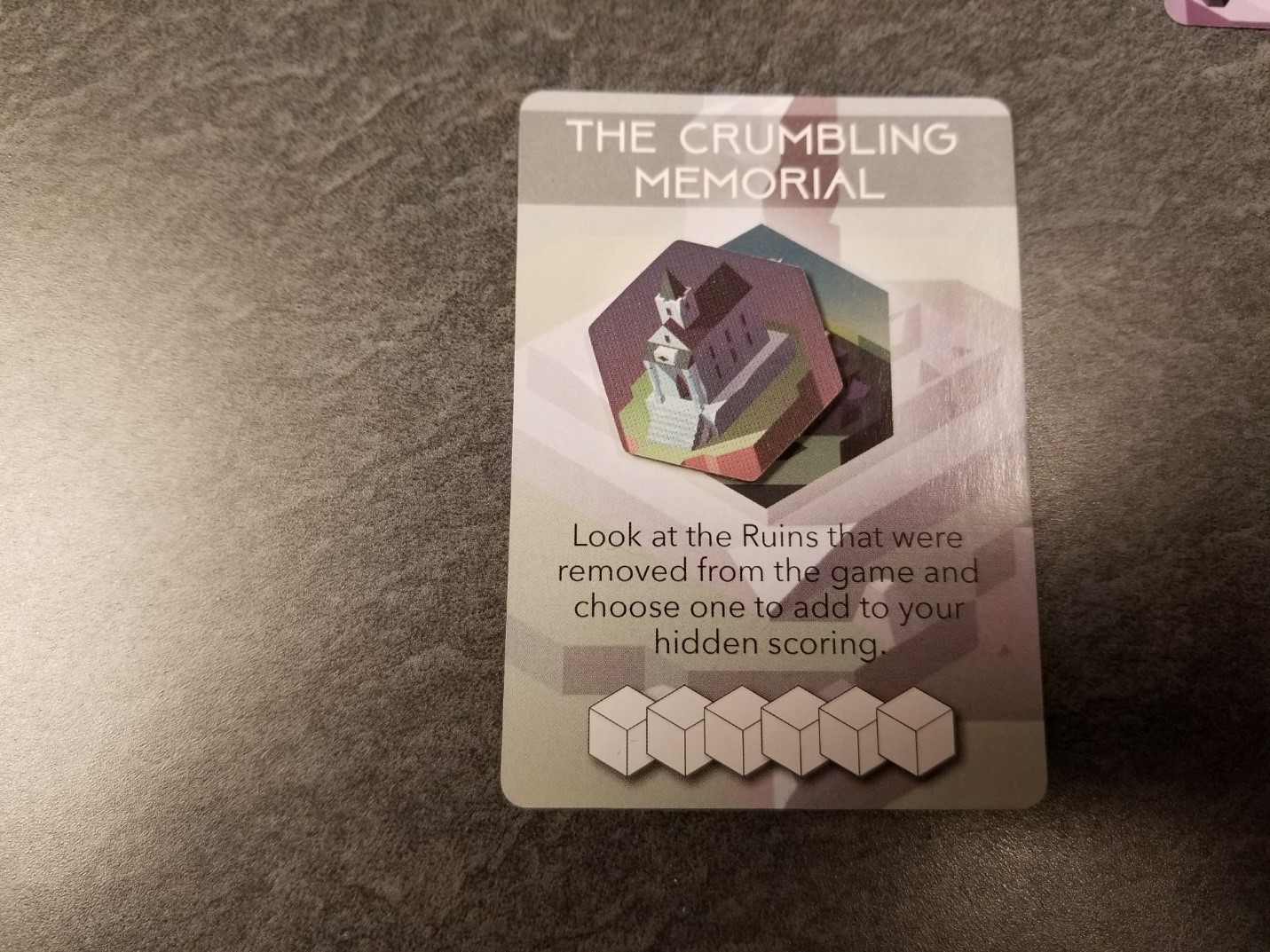 It is that endgame that pulls you back out of the narrative a bit, revealing set collection to be the scoring mechanism, another slight break of theme. Why is it important to discover as much of the same facet of the lost civilization as possible, versus trying to understand the broad spectrum of their history? Not sure, but thatâ€™s the way it goes. And the spectrum can score points as well, as long as you get one of each of the five types of ruin, no less. Recreation of wonders counts toward victory, which I get, though I went in expecting to unearth them, not replicate them. At least VPs are easy to tally, not requiring a long list of categories or calculus app, so Unearth does wrap up nicely.

The quibbles are small, the pace rapid and the strategic layers easy to uncover after a few plays, so Unearth claims a solid place in the museum of lunch-time games with real depth and replayability. Like most, it offers variants to further broaden its scope, but sticking to its core allows players to delve deep, expand their minds and take on a challenge as old as time itself, bending uncertainty to their will and uncovering the glory of an age past.