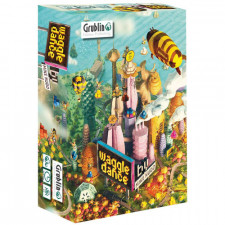 I remember telling my friend about Waggle Dance:

"You see, each player controls a hive of bees--"

"Yeah, and you're competing to gather nectar and--"

"How hard can it BEE? BZZZZZ! We'll see who brings in more honey!"

Okay, maybe I was watching Arrested Development. The point is that Waggle Dance's theming is an instant sell. We've done ants in Myrmes and March of the Ants, but this is the first game I've seen simulating a thriving honeybee colony. And it makes perfect sense for a board game: honey production is a multi-step resource-conversion process, and you've got a hive full of workers to place. 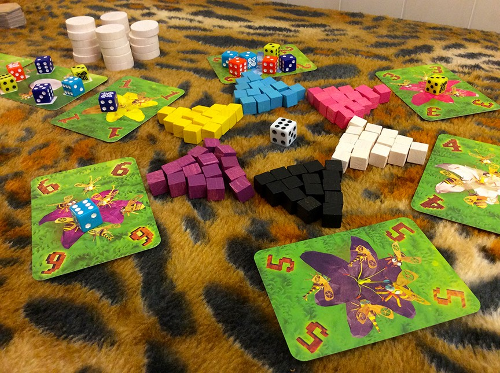 The game is as colorful as a meadow of wildflowers.

Unfortunately, Waggle Dance squanders this perfect theming with confusing, though vibrant, art picturing bee-striped zeppelins, dragonfly-shaped helicopters and absolutely zero actual insects. While images of drone-like bee-bots hauling pallets of cubes are a good way to pictorially describe the various actions, the perplexing weirdness of it all does more harm than good, especially when the rules don't even address it. Are we bees, or are we bee-obsessed robots?

If you didn't know, the "waggle dance" is a fascinating natural phenomenon whereby honeybees communicate the position of resources such as nectar and water to the hive using a specialised "dance language." Which, as it turns out, has zilch to do with the game. Waggle Dance is dice worker placement in the style of Alien Frontiers or Troyes. You could even call it "Alien Frontiers lite," as it has none of the complicated features like straights or sums that made Frontiers' worker placement spots interesting. Generally speaking, if an action card has an empty space matching a number you rolled, you can put a die there and claim it. If you rolled doubles, you can put the dice in your colony to perform various actions there, instead.

The actions themselves are similarly straightforward. Drew, in reviewing Alien Frontiers, praised the variety of actions and the way each one could help you in different ways, saying "any given roll can provide opportunities you werenâ€™t expecting." Waggle Dance is more focused. The singular goal of the game is to flip a certain number of honeycomb tiles to their honey side, and every action feeds directly into this process. You can claim new tiles to expand your hive, gather nectar of various colors, and, once you've filled a chamber with four matching nectar cubes, turn it all into golden honey. There are only two ways to "power up": add workers (dice) by claiming and hatching eggs, or draw a Queen Bee card for a marginally useful, one-time-use special power.

Note that simpler doesn't automatically mean worse. I can imagine Waggle Dance generating quite the buzz with families, especially given the potential lessons in the honeybee life cycle. And, for its simplicity, it's not devoid of depth. Real estate is an important concern, since eggs and nectar can't share a chamber and neither one can be placed in a hex with honey. There's also a point at which hive expansion loses its efficiency: the game is a simple race to 5, 7, or 9 honey, and, in a brilliant move, the tiebreaker is fewest workers. Each player can expand to a stupidly large pool of 18 dice, but after a while, you're just generating redundancy. 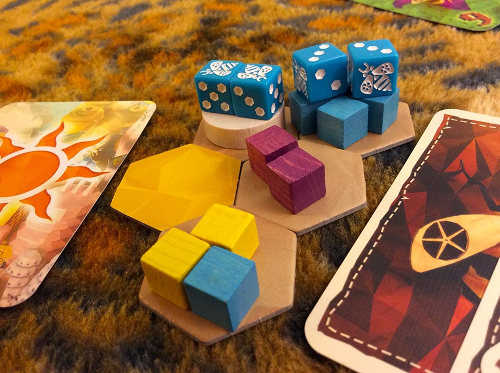 A pair of workers in a fledgling colony hatches a new pupa while another prepares to make honey.

The only spaces that accept multiple workers are the six flowers, one for each die value. Each one is an area majority battle: the winning player claims two nectar of the flower's color, the runner-up gets one, and ties reduce the payout by one. Because everyone rolls at the start of the round and all dice are visible, there's usually not much actual competition for these spaces: it's clear who can win in each category, and unless you need that color to win the game, it's just not worth fighting over it. More often, you'll see that you're the only one who rolled a five and claim majority with a single die, or you'll use the flowers as dumps for your extra dice.

Returning to Drew's Alien Frontiers review, he identified the one fatal flaw as the downtime between turns due to the limited possibilities for planning: "Every turn starts with a roll, and then minutes of staring." Waggle Dance addresses this by letting players take turns placing one die at a time, but there's still far too much hemming and hawing, especially when you can now look at everyone else's thirteen dice in addition to your own. And, in the end, you aren't agonizing because all of your choices are so exciting; you're vacillating because none of them are.

I'll be honest: if it weren't for the honeybee theme, this would be a two-star game. But, even with the art muddying the issue, the mechanics nail the theming, and for thirty to forty minutes, you'll absolutely feel the part of a busy honey colony. Every once a while, the right theme elevates a mundane game to something better, and Waggle Dance is lifted on wings beating 230 times per second.