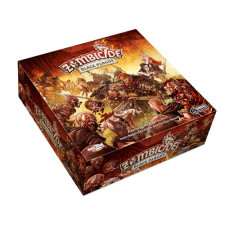 The whole zombie game thing pretty much doesnâ€™t register with me and Iâ€™ve happily passed up many games with this particular subject and never looked back. This includes most of the successful Zombicide series, which has been going strong for Cool Mini or Not and Guillotine Games for a number of years running. But for some inexplicable reason, I was drawn to their fantasy-set Zombicide: Black Plague and it has turned out to be one of my most played games in 2016. Itâ€™s an immensely fun, simple hack-and-slasher with just enough tactics that works as both a crowd-pleaser and also as a great solo option. It is also a game with a ton of additional content available, all of which is of course optional but some it is awfully desirable. So for our inaugural buyerâ€™s guide, weâ€™ll be taking a look at what you can do and where you can go beyond Zombicide: Black Plague.

But first, stop by and check out Craigâ€™s great review of the base game if you havenâ€™t already!

The Wulfsburg expansion is the only big-box add-on to date for Zombicide: Black Plague, and the good news is that it is a great addition that gives you a little bit of both extra good guys and bad guys. Per the title, one of the key additions are Wolfz â€“ thatâ€™s right, zombie wolves â€“ that give you not only just another type of enemy, but an incredibly dangerous type that can activate three times per turn. You also get a Wolfbomination â€“ thatâ€™s right, a wolf abomination â€“ that is even meaner, nastier and harder to kill than the plain old abomination in the base game. On top of new adversaries, the expansion includes four new heroes (all very good) and two new tiles with elevated areas such as towers. Whatâ€™s more, there are also some very powerful new weapons in this expansion that require characters to be at a minimum level to wield them. A pile of new scenarios rounds out a great package that brings a lot of value to the base game.

But Wulfsburg is a little expensive, so if you are looking to bring more undead to the party on a budget there are a couple of choice options available. Murder of Crowz introduces avian zombies that have the annoying ability to ignore walls and doors. Thereâ€™s nowhere to hide from this pile of 20 miniatures straight out of Hitchcockâ€™s â€œThe Birdsâ€. I am also a big fan of the Deadeye Walkers pack, a set of 20 zombie archers that can shoot at survivors when they activate from up to three tiles away. This is a pretty nasty ability that will have you rethinking the survivorsâ€™ game and possibly losing more of them than ever before. Both of these sets increase the difficulty of the game somewhat, but more significantly they create all-new tactical situations in combination with the activations, spawns and other effects of the previous zombie types.

Iâ€™m not quite as enamored of the Zombie Bosses Abomination Pack, however. Itâ€™s definitely something I think those who get a lot of play out of the game will want because the three new Abominations (Abominotaur, Abominatroll and the Ablobination) increase the challenge level by putting extra almost unkillable monsters on the board. And they can break through walls this time around. The problem is that there isnâ€™t a balanced increased in ways to eliminate Abominations. I also feel that this one is a touch over-priced for only three miniatures and a handful of spawning cards.

NPC-1: Notoriously Plagued Characters, on the other hand, brings you 20 new figures in five different models for an expansion that also introduces a new set-collecting mechanic of all things. These spawn with specific cards and are identified by base rings as being NPC figures. If you kill and collect five different types (they are all standard walkers for game purposes) , you get to draw a powerful vault item from those available. Now, this is where this expansion is especially significant. Outside of Kickstarter bonuses and add-ons, for right now this is the only place to get additional vault items to add to the paltry two that come with the base game. Unfortunately, the three new items also arenâ€™t all that great especially if your character doesnâ€™t have any kind of ranged attack bonuses. This is a fun set for variety, but it doesnâ€™t feely anywhere near essential. An NPC-2 set is scheduled for release as well, which will likely have more vault items.

Itâ€™s always worthwhile to have extra heroes on hand so that everyone can pick a favorite. Hero Box #1 brings on five new survivor miniatures with cards while also adding on some extra plastic player consoles, pegs, and colored rings. This is nice if you plan on playing with more than six players, but somewhat wasteful if you do not. One thing I do not like across the board with these expansions is that each comes with all of the print components in multiple languages. This strikes me as incredibly wasteful. Hero Box #2 is also forthcoming.

If the survivors in the base game, Wulfsburg and Hero Box #1 arenâ€™t enough then CMON/Guillotine Games has a full range of Survivor Set: Guest Artist boxes, each featuring four characters, designed for the game by a noted illustrator or artist. These are especially nice to have if you are a fan of one of the artsts (such as Neal Adams or Mark Simonitch), but if youâ€™ve never even heard of these folks then itâ€™s irrelevant. There is a zinger in the Guest Artist boxes, however. A few of them have characters that double as additional Necromancers along the necessary spawn cards. If you want to play with extra Necromancers, then these boxes might edge up to must-haves. For my part, I chose the Naiade box mainly because I liked the big-hatted kid magician and also because it has one of the additional Necromancers.

Rounding out our tour of Zombicide: Black Plague products, there are three items that are definitely not essential but may be of value cosmetically or creatively. The 3D Doors are certainly nice to have, but I would advise that they be saved for after you have collected some of the more impactful additions. They look good painted up to match the board and give a little more definition between areas, but in a choice between 27 plastic doors and 20 zombie archers at the same price point, I think the choice is clear. Likewise, the Token Set (which replaces all of the cardboard tokens with plastic) and the Tile Set (additional tiles for custom scenarios) donâ€™t add anything in terms of gameplay or variety. But some folks might find more utility in these items than I would.

There are also dice sets and some other additions either on the way out in the long march from Kickstarter to retail, but these are the primary products available and I would expect that any additional content would follow along. This is a great game out of the box, and these additions- in particular the must-haves listed- make it even better.