Editorial - The Continuum of Persistence

As human beings, we want to believe that our time has value. As hobbies go, games donâ€™t seem to rate highly on this metric--we all have childhood memories of breaking out Monopoly or Uno to â€œwaste some timeâ€--but we gamers know better. At the risk of oversharing, Iâ€™ve struggled with depression for twenty years, and games, electronic and analog, have always been there to offer me those little payoffs that make life just a little bit more bearable, whether itâ€™s mastering a higher difficulty level in Friday or simply building up my civilization, win or lose, in Imperial Settlers. Even if itâ€™s all make-believe, the idea of buying up duchies to expand your dominion or summoning gargantuan monsters to participate in inter-planar grudge matches is immensely satisfying. We all want to leave our stamp on the world, to make a legacy. 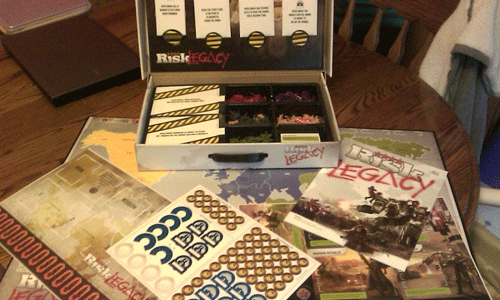 The game that started all of this stickering, envelope tearing, permanent marking, and purposeful defacement of board game products.

But of course this feeling is ultimately ephemeral; when it all goes back in the box youâ€™re left with nothing to show for your time but treasured memories. This explains the crushing popularity of â€œlegacy games,â€ the hot new gaming trend kicked off by 2011â€™s RISK: Legacy. All games fall somewhere on a â€œcontinuum of persistence.â€ Most of them happily sit on the single-session end of this spectrum, though this appears to be changing. These are the one-shot games, designed to be played in self-contained, single-sitting sessions and reset before the next play. Then there are what Iâ€™ll call story-linked campaign games, where each session stands alone mechanically but contributes to an overarching narrative, Lord of the Rings LCG being the perfect example. More popular are campaign games with persistent elements, a category that includes most modern dungeon crawls, Arkham Horror LCG, the Pathfinder and Warhammer Quest Adventure Card Games and many others. In these titles, decisions made during or between games have lasting repercussions on the rest of the campaign, though the players can start over at any time, exploring new choices.

True legacy games like Pandemic Legacy, SeaFall, Gloomhaven, and the upcoming Charterstone occupy the more persistent end of the spectrum. A true legacy game has two defining characteristics: unlockable content and permanent consequences. By affixing stickers, scribbling on the board with Sharpie, and tearing up cards, players leave a permanent, physical impression on the game with every play. Meanwhile, new gameplay elements lurk behind sealed envelopes or advent calendar-esque doors, waiting to be uncovered through play. 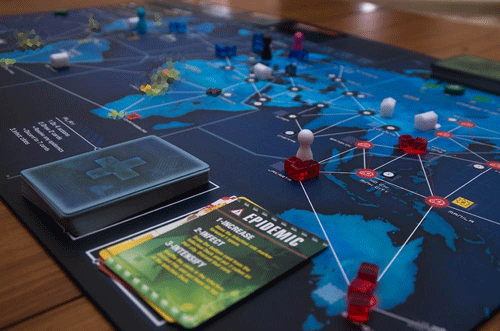 And here is the game that made all that defacement wildly popular in today's board game design paradigm.

Games that are farther right on the track naturally feel more exciting: for the time being, legacy and persistence are exotic elements in game designs. In addition, that persistence enhances the illusion of accomplishment that weâ€™re all chasing. It promises that the collective impact of many one-of-a-kind plays will leave you with a personalized, unique collectorâ€™s item, an experience that is its own momento. Ironically, these games are also inherently disposable: they come with what some gamers have termed an â€œexpiration date.â€

Many gamers have weighed in on this perceived flaw of the legacy format. If a game is essentially â€œdoneâ€ after fifteen plays, is it inherently worth less than a traditional game that could theoretically be played an infinite number of times? People naturally want to get their moneyâ€™s worth in any transaction, but all this hemming and hawing over â€œresettingâ€ is no different from people complaining that a video gameâ€™s 20-hour single-player campaign is â€œtoo short.â€ It's been estimated that over 90% of players never finish a video gameâ€™s story, and most gaming groups wonâ€™t finish a legacy gameâ€™s 15+-scenario campaign. In fact, the vast majority of games are played only once. I suspect that, when somebody complains that they canâ€™t replay SeaFall after completing its campaign, theyâ€™re really complaining that they canâ€™t resell it, and those sorts of mercenary scoundrels donâ€™t deserve to have fun.

Unfortunately, this trumpeting elephant in the room has drowned out all other discussion, and nobody seems to have taken a close look at the other pitfalls of the legacy format. And as the average game trends farther and farther right, itâ€™s worth pausing to examine what weâ€™re losing as we embrace this culture of persistence.

Some of the best games of yesteryear reward persistence of a different sort. The first time I played Race for the Galaxy, I performed miserably, cobbling together a painfully inefficient engine to scrape a few VP chips off the pile every other round while my opponents capitalized on the big end-game-scoring developments they already knew were hiding in the deck. I became moderately successful mimicking this approach until another player blitzed the VP pile before I could get my cards played, showing me another approach to the game and a way to counter this seemingly surefire strategy. Dozens of games later, I am now instinctively weighing these strategies and more as react to the tactical situations the game throws at me.

This used to be the norm. The notion of a â€œlearning gameâ€ was a necessary evil; we knew that if we persisted, we would unlock new possibilities of play, gradually transforming the game we were playing. Sound familiar? The whole legacy concept is an artificial replacement for true depth, just as leveling up every couple of minutes artificially replaced the playerâ€™s developing skill in Castlevania. By doing so, weâ€™ve created a system guaranteed to trigger the brainâ€™s reward centers every time you play. Opening envelopes and tearing up cards offer instant gratification on the level of a one-armed bandit but deny players the chance to benefit from their own persistence. Instead of the players evolving to match the game, the game evolves to match the players.

I never finished Pandemic Legacy. It was too stressful knowing that each time I let an outbreak occur I was sending that city deeper into chaos and leaving my disease eradication team with permanent scars. I wasnâ€™t given the courtesy of a learning game. Persistent games like Arkham LCG suffer from the same flaw. They tell you that there is no turning back, and while itâ€™s an interesting narrative experiment to allow the story to continue from failure, itâ€™s antithetical to what games were once about. The best part of Lord of the Rings LCG was really getting to know a scenario and tweaking your deck to meet its challenges, an experience left behind by Arkhamâ€™s insistent push forward. 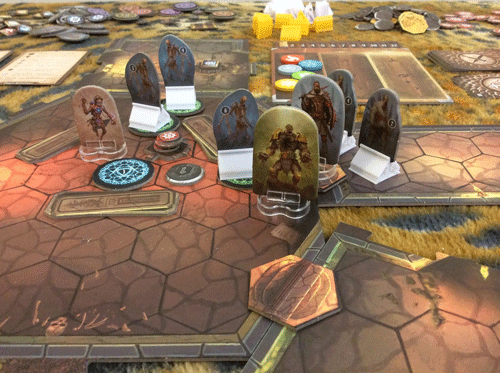 And the new kid on the game defacement block - one of the Biggest Deals in board games in quite a while.

Game designers know that the first play can be critical, but legacy games worship so much at the altar of the first play that they make the mistake of turning every game into a first play. Itâ€™s not the games themselves that are disposable; itâ€™s the experience. Blink and youâ€™ll miss it. Only Gloomhaven, by virtue of approaching its legacy elements with a light touch, manages to achieve depth in the midst of its evolving play state. Gloomhaven scenarios are meant to be replayed until mastered, a fundamentally distinct approach from other legacy titles. Even then, the legacy components like city and road events nearly spoil the solid, traditional game at its core.

Weâ€™re in the early days of more right-leaning games along the continuum of persistence. Right now, legacy games are defined primarily by their legacy-ness, the game beneath serving as a mere platform for a drama in Sharpie and tattered cards. Gloomhaven heralds a second wave, where the legacy props up the experience without defining it. When the novelty wears off, weâ€™ll see if anyone listened.