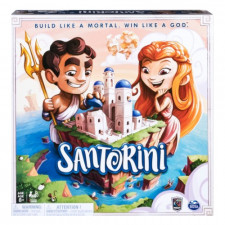 Critical Hits: Elegant simplicity, the hallmark of an abstract game
Critical Misses: Divisive god abilities; great expansion to some, but unnecessary to others

Antoine de Saint-Exuperyâ€™s brother Chico, an avid gamer, once remarked that a game is great not when thereâ€™s nothing left to add, but when there are no other cities on the map after which to name it. Or something like that; the point is Santorini channels the spirit of the frÃ¨res Exupery, delivering a sublime abstract experience akin to chess, go and other classics. And then throws in asymmetric god abilities to appease those who think bishops and rooks should have hit points and melee stats. But it still works. 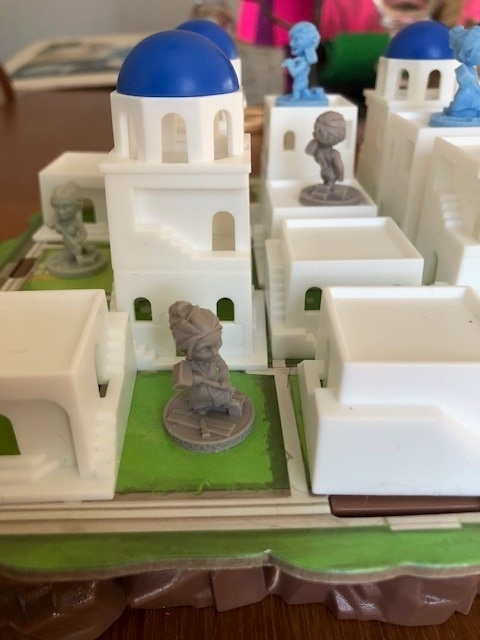 This game has a handful of rules and one victory condition. Playing on a beautiful plastic model of the Greek island weâ€™d all love to live on, even if it involved construction-based competition with neighbors, two players vie to be the first to ascend to the third level of a white-washed structure. Each turn involves moving one space, then building a level of iconic Hellenic edifice adjacent to your token. Players canâ€™t ascend more than one level at a time, can erect blue domes atop a buildingâ€™s third level to block movement, and thatâ€™s it. No spells, resource scarcity, or needing to explain away the nationalities of oneâ€™s helpers. Just pure strategy, abstracted to its peak. Santorini is the kind of game you can envision an octogenarian playing in Central Park against nine different opponents at the same time, shuffling back and forth through the falling leaves to call out moves and frustrate hipsters who just canâ€™t seem to find an app for that.

Then, comes the bit of controversy. Not huge, Mage-Knightâ€™s-not-actually-a-fantasy-adventure controversy or Scythe isnâ€™t a 4X game controversy. This is the best kind, where players who want the god powers can include them, and players who donâ€™t can skip them and still get maximum enjoyment. The alternate rules feature thirty different Greek gods, each one granting its avatar a game-breaking power, changing up the simplicity of Santorini to the joy orâ€¦meh of players. And this is a good thing. Just not a great thing, quantified by my half-star rating subtraction. Why not great? Because the powers arenâ€™t perfectly asymmetrical. 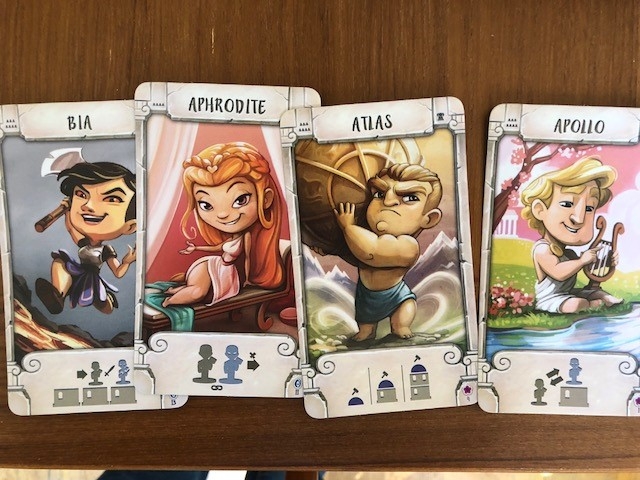 Successfully combining the warm puppy of Euro-certainty with the wifeâ€™s raised-eyebrow questioning of the game state is an elusive target, and there are paradoxically two ways to hit its bullseye: either ignore randomness completely, like Santoriniâ€™s base game and nearly all the abstract classics do, or crank the rule-breaking to eleven, a la Rising Sun. Santoriniâ€™s pantheion (gotta include the â€œiâ€ to stay Greek) cruises somewhat down the middle, including gods that the rules say should not be played against certain other gods because of their nemesis-like cancellation of each otherâ€™s abilities. Ironically, Nemesis, the Greek goddess of retributive justice, isnâ€™t included in the game. AllÃ¡ EgÃ³ ektrÃ©po.

So this tweak sits at the periphery of oneâ€™s vision, like a tiny bit of chipped stucco catching the evening sunâ€™s rays just before it recedes beyond the waves, causing your significant otherâ€™s small sigh as the wine glass is raised and reminding you that while you do live in paradise and this eveningâ€™s seafood dinner was exquisite, you were in fact near the paint store earlier today on your way back from the fishmongerâ€™s. 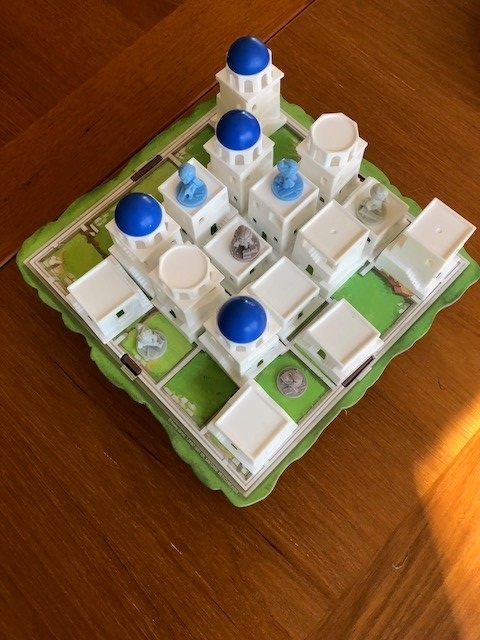 Santorini almost perfectly walks the tightrope of being a new abstract classic while carrying an El Doradoâ€™s worth of add-on baggage to satisfy the Michael Bay crowd, and if the gods had been perfectly unbalanced it would have silenced fansâ€™ â€œReally, thereâ€™s something else we didnâ€™t know about the Transformers?â€ skepticism. Oh, and it does include rules for three or four players, which is pretty much like remaking Clash of the Titans without a stop-motion owl. As the consumer worldâ€™s proven time and again, someone somewhere wants it. But thatâ€™s the beauty of Santorini: itâ€™s all either necessary or easily left out. For purists like me, Santoriniâ€™s a spectacular mental challenge with a few extra cards for decoration. For others, the gods are the extra seasoning lacking in the base game. For all, itâ€™s a good time.